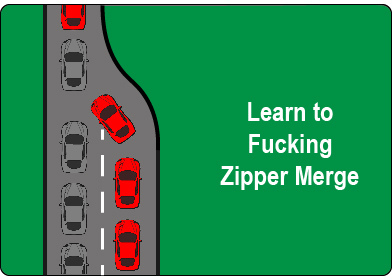 This post might be controversial. You might say in your whiny voice, “This is just your opinion. It’s not the law.” But here’s the thing: if you fight the zipper merge you’re violating something more important than the law. You’re violating the laws of nature. You’re contradicting fucking science. And while that would be one thing if you were Elon Musk or Neil DeFuckingGrasse Tyson… you’re not. Are you? No, we didn’t think so.*

So listen as we say it slowly so you can grab hold of this concept:

The Zipper Merge Is the Fastest, Safest Way to Merge

And again, it’s not just our opinion (although it sure as shit is our opinion), it’s also… again… science. Don’t believe us? Here’s proof:

Not enough proof? Think that’s all “fake news?” Here’s a fucking research paper from Wayne State University in Michigan: “Evaluation of the Dynamic Late Lane Merge System at Freeway Construction Work Zones – Final Report.” Sexy title, eh? No! It’s not! And it doesn’t have to be, because it’s fucking science!

Dear readers, we work on this website from the Midwest. From the state of Ohio, in fact. But we didn’t always live here in Middle America. We grew up in the West, where people roam free and there used to be no speed limits. It wasn’t until coming to the Midwest that we witnessed the phenomenon of people actually blocking the lanes when other motorists tried to drive past the long line of cars patiently waiting single-file after only having seen a vague “Merge Ahead” sign, with no indication of how far ahead. We shit you not…we have seen lines of cars over a mile long, in a single lane. And we’ve seen those same cars not only pull out in front of motorists who might be just trying to get to the next exit (when as it turned out was actually before the construction forces the actual merge), but once blocked from the front, cars pulled out behind as well to ensure that motorist is safely escorted in their little traffic Nazi formation until they get the fuck back in line. This behavior is insanity.

Okay, deep breath…back to the science.

By not artificially holding up traffic (forcing cars to merge before they have to), the effects of the merge are not pushed back into the traffic flow any further than is absolutely necessary. And if cars zipper merge from the start of traffic flow (e.g.- before traffic is heavy enough to cause a significant slow-down), the smooth flow of safe-speed merging actually keeps traffic from backing up as badly in the first place.

Still don’t believe us? Honestly we don’t fucking care. This cattle-like behavior of forcing others into line because you refuse to believe in the proven science of the zipper merge is the same kind of garbage thinking that’s got this planet into the predicament it’s currently in. If you can’t see sense, we want nothing to do with you.

*If you actually ARE Elon Musk or Neil DeFuckingGrasse Tyson… please do take a second to Contact Us and say hi.