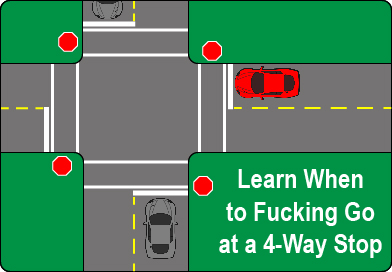 Okay maybe this is a little confusing. We’re talking about stopping, but we’re telling you when to go. That’s because stopping, and then going, at a four-way stop (also called an “all-way” stop, but only by imprecise freaks) is apparently challenging for a lot of you. So we’ve decided to help you out.

As with many of the principles here on LearnToFuckingDrive.com, these may seem like suggestions or nice rules of thumb, when in fact they are fucking rules. And fucking rules on the fucking road are generally fucking laws.

The Rules of Four-Way Stops:

Now, as simple and clear as that is, some of you have questions. More of you still won’t do it right. So here are some other helpful tips:

What Not To Do At a Four-Way Stop:

Okay… let’s review. Go in the order you got there. Furthest right first. Straight, then right, then left turns. That’s really it. Now you have no excuse. Get out there and do it right. Was it Thoreau who said, “Go confidently in the direction of your dreams”? Or was it Frances McDormand in “Almost Famous?” Anyway… you get the idea.