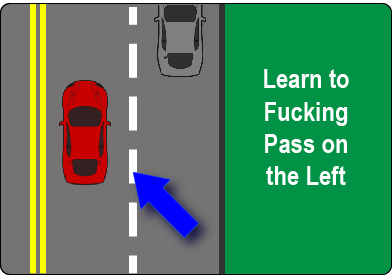 Driving on the freeway is not the same as driving around town. As such, there are a few specific things you need to have figured out in order to keep things smooth. With higher freeway speeds comes greater risk, and greater harm when rules aren’t followed.  Here are the basics for making sure you’re prepared to run with the big dogs, so to speak.

Why You Should Pass on the Left

There are several simple reasons to pass on the left that we don’t need to deal with in detail. They include:

In countries that drive on the left side of the road, they pass on the right. No matter what side of the road you drive on, slower traffic always stays to the outside lanes, faster traffic moves to the inside. That allows people coming up to speed (when entering the freeway) or decelerating (when leaving the freeway) to do so safely, not entering or exiting the fastest lanes. Passing on the left is not just a courtesy, it’s the safe way to drive. It’s the predictable way to drive. And predictability is a huge part of safety. If you know faster traffic is coming at you from the left, you know where to focus your attention. If you’re not sure where it’s coming from, then you’re putting your attention everywhere, which is neither wise, nor possible.

Passing On The Left – Here’s How It Works

And What If You’re the Slower Driver?

If you are behind a car that’s slowing you down and they won’t move, flash your lights quickly, signalling to them that they should move over. If the don’t move, honk the horn to let them know you’re there.

If you’re in the middle or left lane and someone flashes their lights or honks, move over and let them by. Are they going too fast? It’s not your job to police the freeways. Better they get past you and take their recklessness somewhere else, than that they tailgate you and cause an accident because you’re trying to be everyone’s mom.