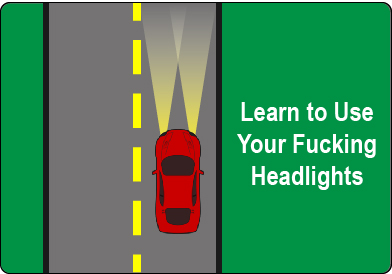 You just made us include this one, didn’t you?  Early-morning driver…tooling along without a care in the world, just sipping your coffee and trying to wake up? Dusk driver…maybe on the road since the sun was bright in the sky, now oblivious to the fact that we can’t see your fucking car because it’s night time. Or you, rainy-weather driver, gripping the wheel until your fingers bleed because you’re terrified of that wet stuff on the road, completely forgetting the most dangerous thing in the storm is you and your lightless vehicle..

Whatever your reason, there’s really no excuse.

Turn On Your Fucking Headlights Jackass

You’re like the child who thinks because he covers his eyes during “hide-and-seek” that no-one can see him. Except you’re the opposite. You think because you can see everyone else’s cars, that they can see yours. You’re wrong.

Most states have laws requiring motorists to use their headlights from 30-minutes before sunset to 30-minutes after sunrise. In other words: whenever there’s the slightest chance of you not being seen, or when there’s an increased need to make sure you’re seen (such as in construction zones).

When Turn On Your Fucking Lights

Pretty straightforward right? Also… we apparently need to call this out too:

When to Use Your Fucking High Beams

Your high beams help you see further by changing both the strength and the focus of your headlights. Your normal headlights are aimed so that they don’t point directly in the eyes of oncoming motorists. If you park in front of a wall at night and turn your normal headlights on, you’ll see that the left headlight is pointed slightly to the right so it illuminates your path without blinding other drivers. Your high beams, or “brights,” however are not similarly oriented. They are much more powerful beams, and they are not pointed away from oncoming traffic. So, it’s very important that you turn your fucking high beams off when cars are coming toward you, or when you’re sufficiently close to traffic going the same direction in front of you. How close?

Seriously, this isn’t something that requires an advanced degree in headlights, it’s something you do if there’s the slightest chance you might need to. Is there any possibility that you turning on your headlights may make your vehicle more visible to other drivers? Maybe?

Then just do it. Turn on your fucking headlights.