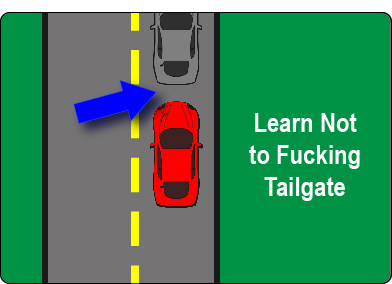 Do you remember when you took your driver’s test? You never took one? Well that makes a lot of sense, given the way you’ve been driving lately. But had you ever taken a driver’s education course, and passed the test at the end, you might remember your driver’s ed instructor telling you about how to judge a safe following distance at any speed.

Do you remember what that guidance was?

Go ahead… think about it… we’ll give you a minute.

No? Okay – we’re not surprised, because if you knew this little piece of helpful information maybe you’d actually be using it, instead of riding our ass at all hours of the day and night, and maybe rear-end collissions wouldn’t be the most common cause of traffic accidents.1

There’s a really easy way to know whether you’re too close. And interestingly, the scientists behind self-driving cars are figuring out that the distance both behind and in front of you matters to traffic safety. In other words, robots are doing it better than you. Do you feel bad yet? No? We’ll keep trying.

Look, the roads may be icy. You may have slower than normal reaction time. Maybe it’s foggy. We can’t guarantee that three seconds will always be enough. We’re not the DMV, and ultimately being safe is up to you. We’re just trying to help here.

How to Apply the Three-Second Rule

We’re going to break it down for you, because apparently a lot of people need help in this area. We’re not saying your “unsafe at any speed;” only Ralph Nader is qualified to judge that. We’re just saying you frighten us. We fear for our lives when you’re behind the wheel. No, seriously. You’re terrifying. How does that make you feel?

If you’re suitably chastened, then try this next time you’re behind the wheel.

Okay Mario Andretti… we’ve given you another precious tidbit to increase your safety and the safety of everyone around you. It’s up to you to use it. Don’t let us down.